When it comes to application development, localization is perhaps the few things we do every day without even thinking. Most products / projects will have their own well defined way to localize information. I'll recap the basic localization support DotNet offers via a simple console application.

In this post, we'll look at two samples; one where we use Visual Studio to do everything and second where we will use AssemblyLinker (al.exe) to generate the satellite assemblies by hand. In both samples, we'll support three languages: neutral, en-IN and en-GB. The neutral language resources will be used whenever the application is run on a system whose language does not match any of the two languages (en-IN and en-GB).

Sample 1 - Using Visual Studio for everything

Create a folder called Resources at the root of the project, this for helping us keep resource files together and avoid clutter.

In Visual Studio, right click on the Resources folder and select Add -> New Item and select Resources file. Name the file Strings.resx - this is going to be the default resource file. 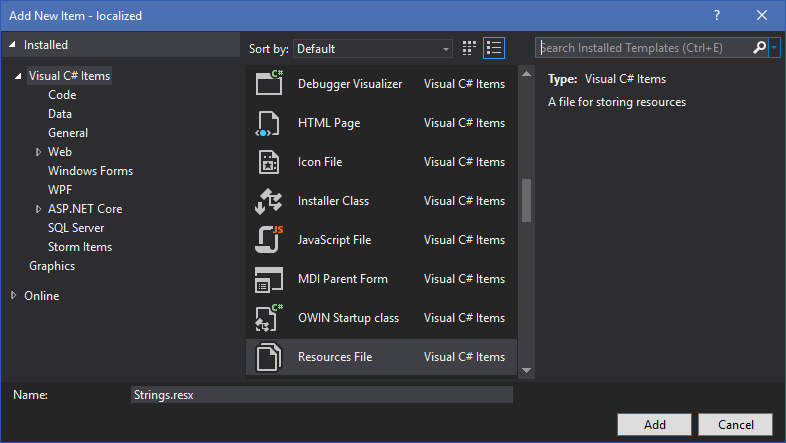 Ensure the build action for all the resx files is set to 'Embedded Resource'; this can be see in the properties window.

Build the project once to see everything builds OK. Open the Program.cs file and edit the code to match:

Run the application to view the output.

As you can see, a different greeting is printed for each language.

If you inspect the bin\debug folder, you'll see the exe as well as a folders named en-IN & en-GB. These folders contain the resource dll for the respective language. In the next example, we'll build the resource dlls ourself. The whole languages support works on the basis of placing the resource dlls in the correct language folders.

Copy the entire project folder of sample 1. After copying, rename the project file in the new copy to localized2.csproj and add it to the solution. This is just so that we don't need to retype all the strings we defined in the last project. Since we don't want Visual Studio's help to build the resource dlls, select the Strings.en-gb.resx and Strings.en-in.resx and set the 'Build Action' in the properties windows to 'None'. Rebuild the project and run it, you should see only the default language greeting string for all the languages. Note, we are string building the Strings.resx as an embedded resource so that it will be available within the exe; this is a good practice to have the neutral culture resource in the main assembly.

Start the Developer Command Prompt for Visual Studio and navigate to the project folder. In the command prompt type in 'notepad build-resources.bat' & enter the following content and save the file.

What we have here are the commands to compile the resources in the resx to a resource file using the resgen utility. The next utlity al (assembly linker) is used to build an assembly out of the binary resource file and while doing so also mark the culture-information against the assembly.

Run this batch file from the project folder where you have the localized2.csproj file. The output should look something like this:

Build the actual project. Running the application should give you the same output as the first.

So there you have it - building plain vanilla resource dlls using Visual Studio and using DotNet's SDK tools.