If you're reading this article there's a good chance you already know about oData - what it is and why you want to use it. OData is a standard for querying for information and is built on top of REST. It standardizes certain query operations like limiting number of returned objects, performing paging, counting returned elements, selecting objects based on conditions and many more. It's an open protocol and is gaining support from number of informaiton providers like SalesForce, Netflix and others.There are a number of good introductory articles on oData like this one: https://msdn.microsoft.com/en-us/data/hh237663.aspx.

Source code for the sample application

Download the source code from the link 'Download related material' link under the title. Nuget packages required for building the sample have been deleted to reduce the size of the download. To build the solution correctly, open the ODataMovies.sln file and go to the main-menu -> Toos -> Nuget Package Manager -> Manage Nuget Packages for solution -> In the top bar click the Restore button - this should download required OData packages from Nuget.

For this article we'll be exposing movies via oData. A Movie has an id, title, rating, last-modified-timestamp, director. Rating is an enumeration of stars from one to five, director is a Person which has a first-name and a last-name. These classes make up the 'model' of our application. 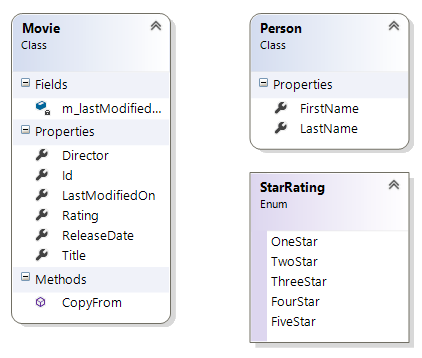 OData services can be written using WCF or ASP.NET Web API. In this article we'll use ASP.NET Web API. We'll call the project ODataMovies and make the data available under the uri /odata. This means all endpoints will have an address like: http://localhost/odata/

Fire up Visual Studio 2015 and create a new Web Project. In the following screen select:

From the main menu select Tools -> NuGet Package Manager -> Package Manager Console. At the PM> prompt enter: I am explicitly specifying the version here. You may not be needed. As of this writing, 5.8.0 is the latest version and this is what will get installed if you don't specify the version explicitly. Having said that, the oData team seems to be changing some classes and even removing some like EnititySetManager which was present in earlier version so locking down the version will ensure that the project will work even if new version of oData is released.

First we'll add the model classes which are Movie, Person and an enum called StarRating. Its a good idea to create these .cs files within the Models folder though its not necessary. We will be exposing only the Movie object via our oData service.

Routing refers to understanding the URL format and translating that to method calls. For e.g. if someone accesses http://localhost/odata/Movies, this should fire a method where we can write code to access movie objects and make them available to the client. This routing setup is done in the App_Start/WebApiConfig.cs file. Replace the existing code in the Register method with:

We'll have a thin business layer which will provide services to store and retrieve model objects i.e. the movie objects.
Create a new folder called Business. Create a new file named DataService.cs. Instead of actually storing the data in a database, we'll just work with an in memory list of model objects.

In order to serve oData request we need to create a controller class. A controller is responsible for managing a resource, for us the resource is the movie collection. When we registered the route, the following line exposed the movie resource:
modelBuilder.EntitySet